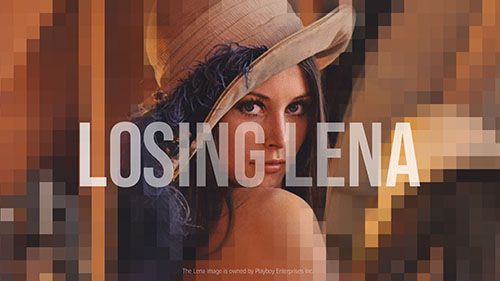 Posted at 19:33h in Campaign of the Week by Jenna

A documentary campaign to drive awareness of the gender inequities inherent in the world of tech, laying the groundwork for unbiased image selection moving forward.

Looking to create an environment that fosters creativity in tech and welcomes both females and males into the industry, Creatable and Code Like a Girl set out to make a meaningful change that would impact the way the tech industry is viewed in years to come. Enter the Losing Lena campaign

Lena was a Sweedish Playboy model whose image was picked in the early 70’s by a team of male researchers at the University of Southern California (USC) to become the ideal test image for algorithms used in programs to digitalize film photos. The research Lena’s image was used for became the basis for the development of the digital image file ‘JPEG’.

Lena is an icon of the gender divide inherent in today’s tech industry,  as Ally Watson, Code Like a Girl founder and CEO puts it – tech is used by everyone regardless of age, gender, ethnicity, or sexual identity, but when developed by a small homogeneous group, the end product is likely to be biased.

Women often feel like outsiders and imposters in the world of tech due to male dominance and ‘brogrammer’ culture. Lena is infamous as her image is used by tech companies and universities worldwide to test algorithms. Her image has been studied more than the Mona Lisa, earning her the title of Tech’s Original Sin. Together, Clemenger BBDO Sydney, Code Like A Girl, and Creatable wanted to change this.

The strategy behind the campaign focused on telling Lena’s story, bringing awareness to the bias in selecting the original test image for algorithms in tech, and paving the way to a more equitable future for millions of women in the industry.

The end goal continues to be the retirement of Lena’s image, seeking to shake the industry awake to the reality that just because Lena has been used as a test image for the past 50 years, it doesn’t mean this should continue.

To achieve this and affect change, Clemenger BBDO Sydney, Code Like A Girl and Creatable created an open-source toolkit consisting of a documentary, 18 social videos, and an activism website with the goal of demonstrating how seemingly minor decisions like choosing this image years ago, can have an effect in generations to follow and lay the foundation for less than ideal industry practices.

The campaign documentary premiered on Facebook Watch on November 2019 and the campaign continues today. Through Code Like A Girl’s Messenger chatbot, leaders in the tech industry, academics in the field, and general supporters can pledge on www.losinglena.com, offering support for the retirement of Lena. This change in the tech world is ongoing, but it will ultimately broaden the horizon of Artificial Intelligence and Machine Learning tools, laying the foundation for using unbiased imagery to test algorithms in the years to come.