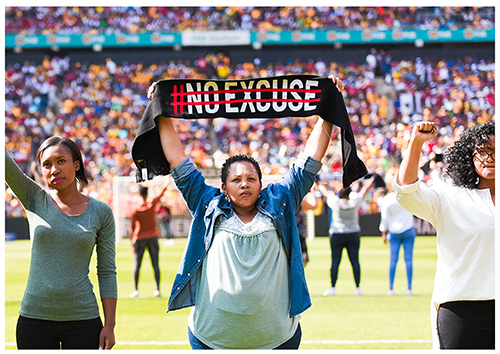 09 Mar Campaign of the Week | #NOEXCUSE Soccer Song for Change

Posted at 22:24h in Campaign of the Week by Jenna

A song advocating for women’s rights and against domestic violence.

In South Africa, the murder rate of women is 5 times higher than the global average. Gender-based violence still remains widespread in the country, with oftentimes the perpetrator is a woman’s intimate partner. In the United States, an average of three women are killed every day by a former or current romantic partner. In South Africa, by comparison, a woman is killed every four hours under the same circumstances.

Recognizing that male partners perpetrating abuse had often consumed alcohol prior to hurting their partners, Carling Black Label – a Canadian beer brand – recognized the need to acknowledge the role that alcohol-abuse played in this societal issue.

Carling Black Label worked with Ogilvy Cape Town and AB InBev, a multinational brewing company, leveraging the brand’s reputation as a beacon of masculinity in order to challenge how men react to violence against women.

The #NOEXCUSE campaign (2018 – ongoing) has the objective of mobilizing men to take positive action in protecting women, driving awareness by fostering conversations around the topic of violence against women and providing tools that can drive real change.

AB InBev, Carling Black Label, and Ogilvy Cape Town worked to leverage the beer brand’s sponsorship of the Soweto Derby; one of the most contested soccer matches in the country between the notoriously rivalrous Kaizer Chiefs and Orlando Pirates. Together, they decided that a full stadium of high-energy, impassioned men drinking Carling Black Label’s beer would be the ideal platform to share an important message – one they could take home and reflect on after the game.

The campaign saw a choir enter the field just before kick-off and hijack Masambe Nono, a well-known South African football song. The choir substituted the song’s existing lyrics “Let’s go, my baby, let’s go and sleep” with those from the women’s choir’s revised lyrics; “There is no excuse for female abuse”. Happily singing along, the crowd was taken by surprise when the lyrics became evident. The revised version discussed the all-too-common story of a South African woman being abused by her partner when he comes home under the influence of alcohol following a soccer match in which his team has lost.

The revised lyrics were carried live on the big screen at FNB Stadium and the choir’s performance was televised at no cost by the South African Broadcasting Corporation (SABC) and Supersport. Commentators were briefed prior to the game and were ready to explain the meaning behind this unique intervention to their millions of viewers.

Carling Black Label added the #NOEXCUSE tagline to the beer cans sold at the stadium the day the demonstration took place. The revolutionary campaign  transformed Carling Black Label from being a potential factor in the excuse for abuse (as the biggest beer brand in South Africa) to becoming the number one champion against it.

The total reach achieved was 45 million, and the campaign received a shout out from Didier Drogba, the all-time top scorer and former captain of the Ivory Coast national team. Since 2018, the campaign has been rolled out in 5 other countries. The #NOEXCUSE Soccer Song for a change activation was one of the Grand Prix at Cannes Lions winner in 2018 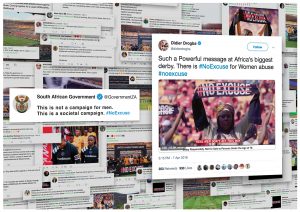