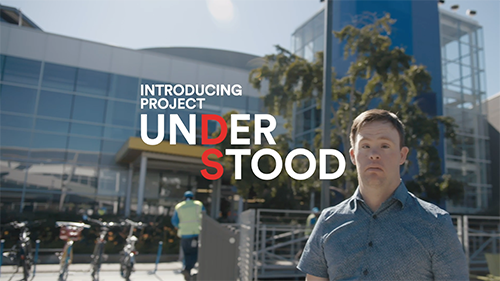 Posted at 01:15h in Campaign of the Week by Jenna

A collaborative effort designed to teach Google’s voice assistant how to understand people with Down Syndrome, ensuring inclusivity and life-changing independence for this community.

2020 will likely become a landmark year in the coming decades. Defined by a global health crisis and a fight for social justice and inclusivity, this year has brought complex issues encompassing a wide range of vulnerable populations to the forefront. Today we highlight speech inclusivity for people with Down Syndrome.

With 8 billion voice assistants forecasted to be in use by 2023, the future will become more technologically reliant than the present – opening up a new realm where inclusivity must be prioritized. The atypical speech pattern characteristic of people with Down Syndrome resulted in  Google’s voice assistant misunderstanding one out of every three words spoken, creating understandable frustration. Fighting for inclusion, The Canadian Down Syndrome Society (CDSS) worked with creative agency, FCB to make voice technology accessible to people with Down syndrome, and shift the stigma commonly associated with this community.

People with Down Syndrome are able to live independently, so long as they have a structure in place that works for them. Still, having support is important for this community to be able to go about their lives safely. Being able to make use of a voice assistant to remind them of important daily tasks, such as the steps to complete their routines, as well as to request assistance and help if needed is invaluable.

Driven by the realization that for people with Down syndrome, the ability to access and use voice technology is a vehicle to achieve life-changing independence, FCB and the CDSS reached out to Google and together, they conceptualized and launched Project Understood – a project designed to teach Google how to understand people with Down Syndrome.

Project Understood, effectively turned people with Down syndrome into Google’s teachers, using their voices to actively engage, and train Google’s speech recognition technology to be able to understand them.

The immediate impact was visible, earning 775 million media impressions globally and engaging 735 Down syndrome organizations in over 30 countries. The long term goal is to create a data recognition model that can make voice technology accessible to everyone in the world with an atypical speech pattern.

Google and the CDSS presented their research at the UN on March 20, 2020 – calling on all tech companies to join together to make voice technology more accessible. More importantly, Project Understood changed the public perception of people with Down Syndrome, portraying them as capable, and important members of society.