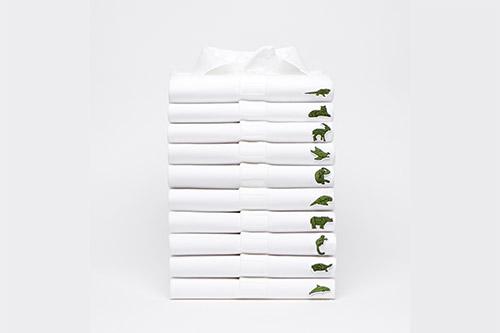 16 Jan Campaign of the Week | Save Our Species

Posted at 21:45h in Campaign of the Week by Jenna

An awareness effort to drive collective action in hopes to improve the preservation of biodiversity and endangered species.

Aware that fashion is the second most polluting industry in the world, Lacoste set out to demonstrate that their sense of responsibility for the environment surpassed basic respect of CSR charters. They wanted to lead the way for other brands to drive environmental sustainability efforts, while also raising awareness of the International Union for Conservation of Nature (IUCN); a global authority on the status of the natural world and ways in which we can safeguard it, all while attempting to engage new stakeholders and current supporters alike. BETC Paris stepped up to the task.

Recognizing its crocodile logo sits at the brand’s core identity in customers’ minds, Lacoste, with BETC Paris, found a clever way to make a statement on the state of biodiversity in our planet and its alarming depletion rates. The brand released a limited edition collection like no other, removing the iconic logo and replacing it with 10 threatened species, each with its own highly detailed embroidery. The amount of polo shirts created for each threatened species directly corresponded to the remaining population in the wild, meaning each live animal from this selection of species facing extinction was represented by one individual shirt. How many shirts were released? Just 1,775.

All profits from the collection went to the IUCN’s Save our Species (SOS) program. Lacoste and BETC Paris strategized to have the last 10 looks in Paris’s Fashion Week’s Fashion Show inspired by the 10 species, and launched the campaign with a video teaser where the crocodile logo disappears, followed by a full campaign video.

The campaign went viral on social media immediately after its release and the limited edition polo shirts sold out within the first 24 hours, with 76% of buyers never having purchased Lacoste items in store prior. The Mexican government reached out to the CEO of Lacoste in Mexico thanking the brand for promoting saving the vaquita, the world’s smallest cetacean. The campaign saw a fourfold increase in IUCN donations and a 200% increase in traffic on the saveourspecies.org website. Additionally, IUNC newsletter subscriptions increased by 300% the month of the campaign.

The IUCN’s tweet on the campaign resulted in 904,000+ impressions, 18,000 engagements, and was retweeted by over 2,100 accounts, and the IUCN received 100% more inquiries from brands in sectors that had not previously reached out to them, including sports, luxury tourism and supermarket retailers.

This success led to the production of Lacoste’s second campaign for IUCN: “Crocodile Free”.