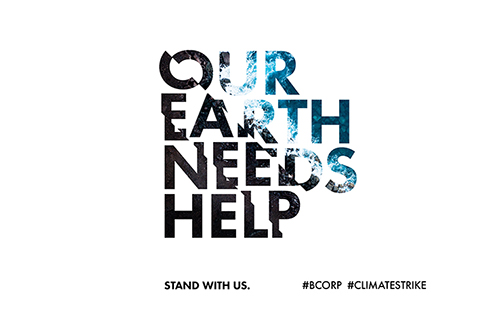 17 Sep The Agenda | Vol. 18 | Climate action secures a place on the agenda 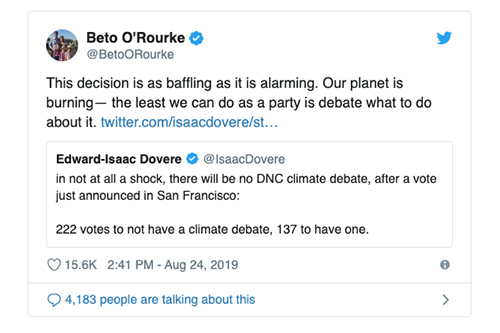 Youth frustration with climate inaction has held a prominent place in past issues of The Agenda, and we’re pleased to report that, while there’s still much work to do, it seems like their voices are starting to be heard. Though DNC Chairman Tom Perez shut down the prospect of a climate debate, against the wishes of many DNC members, CNN hosted a series of climate town halls with Democratic presidential hopefuls, and NYC and Toronto school boards both recently announced students will not be punished for taking part in upcoming climate strikes on September 20th and 27th.

How are those in power being convinced to take the looming climate catastrophe seriously? With the help of some impactful communications campaigns, of course. Read on to find out more. 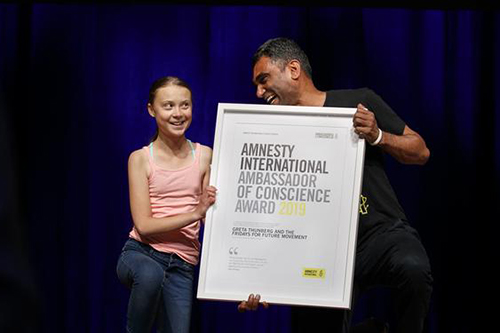 Swedish activist Greta Thunberg landed off the coast of New York in August in a zero-emissions boat for an extended North-American visit. She is encouraging Americans to take part in a September 20 Global Climate Strike, just ahead of the UN Climate Action Summit on September 23 (a similar strike will take place in Canada on September 27).

What’s changed since the Global Climate Strike that took place in March of this year? Thunberg and Fridays for Future were recently honored with Amnesty International’s 2019 Ambassador of Conscience Award. Attacks on Thunberg by right-wing politicians have ramped up, but both school boards and brands are beginning to treat young people’s climate concerns with the reverence they demand. New York City and Toronto school boards issued statements assuring students who participate will not be penalized. Patagonia and Burton will close stores on September 20 in solidarity, and more than 1,000 Amazon employees (mostly at the behemoth’s Seattle headquarters) have pledged to join the strike.

Media and responsibility in covering the climate crisis

Part of what makes truly addressing the climate crisis seem like an impossibility is the fact that it goes grossly underreported on in mainstream media. The Guardian asserted a leadership role in underscoring the severity of the climate crisis by changing the language used to describe it. In addition to using the terms “climate emergency,” “climate crisis,” and “climate breakdown” in lieu of “climate change,” the paper scrapped “climate skeptic” and “global warming” in favor of “global heating” and “climate denier.” Canada’s National Observer followed with similar language updates, and the country’s national public broadcaster, CBC, updated its guidelines to allow for language reflective of the severity of the issue. Vice Media had issued its own guideline update prior to The Guardian’s announcement.

Later that month, Canadian journalism professor Sean Holman penned an open letter to Canadian media, calling on them to treat the climate crisis with the urgency it deserves. In response, media union CWA Canada expressed support for Holman, as did the Canadian Association of Journalists and several American journalists. Holman’s open letter has been shared on social media more than 12,000 times. 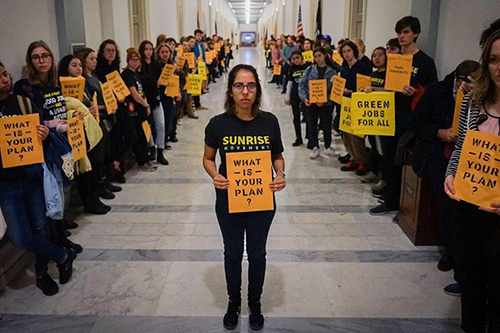 One of the most prominent groups in the fight for climate action is Sunrise Movement, a youth-led political movement fighting to stop climate change and drive the creation of good-paying green jobs. The group has gained notoriety by confronting politicians in Washington — a catalyst for its growth was when a group of 200 occupied Speaker Nancy Pelosi’s office for hours. 51 were arrested. The next time they occupied Congress, there were 1,000 of them.

Sunrise Movement activists have been among the loudest voices calling for a climate debate for Democratic presidential hopefuls, and though the DNC voted down a resolution to hold a climate debate, Sunrise’s actions have resulted in CNN hosting climate town halls, candidates releasing more ambitious climate platforms, and MSNBC hosting a climate forum.

The new face of climate activism is young, angry — and effective

More than 100 CEOs and business leaders in Canada, the U.S. and UK recently signed a statement calling for climate action now in advance of the upcoming global climate strikes.

A group of B Corps (companies that undergo a certification process to verify their net-positive contribution to society and intention to use business as a force for good) coordinated this collective action among business leaders to demonstrate the business community’s support for the climate strikes and students’ calls for climate action. This follows Greta Thunberg, who has led student protests across the globe, asking for those with influence to stand by students during Climate Change Week.

The full list of CEOs and businesses that have signed this statement calling for immediate climate action now is available here.

Heated: Climate journalist Emily Atkin recently left The New Republic to start a newsletter dedicated to original reporting on climate change, and what she’s created will get you fired up about those who are preventing climate action, and illuminate why the “personal choice” narrative (ie: if we only used less air conditioning and didn’t drive as much we’d be okay) is so bunk. The newsletter launched with a whopping 10,000 subscribers earlier this month.