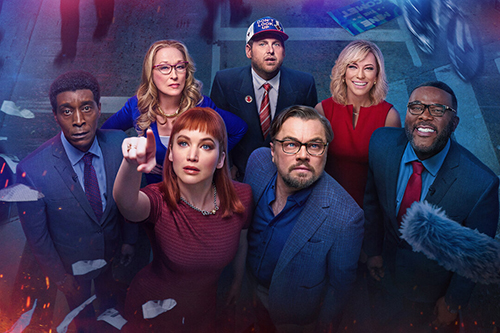 Happy New Year, Agenda readers. Larry David isn’t among our readers (yet?), so nobody tell him we used that greeting after the January 7th statute of limitations and we’ll be good.

Are you good? We’re putting a lot of pressure on 2022 to deliver us from the crapstorms and pandemic-driven funk that have hovered around since March 2020 and through 2021. But contrary to what a slew of memes circulating would have us believe, blaming a year for our discontent kind of means giving up the agency we all have, especially as comms pros, to make future years better. So to get you in gear, we’re kicking off 2022 with an edition that highlights communications that are taking risks, naming names, and moving people to action to secure a healthy and equitable future on Earth. If you’re a scanner, be sure you don’t miss our new “Ways to Act” section at the end of the newsletter, which highlights small things you can do to impact the world around you and go about your day feeling empowered.

SDGs covered in this issue:

We could probably write a whole issue about Don’t Look Up, a star-studded film about a comet headed for Earth and scientists’ stymied efforts to mobilize a response to save humanity. While many climate communicators lauded the film’s accurate representation of how governments, corporate interests and media downplay the threat of the climate crisis to serve their own interests, others took issue with its oversimplification of the subject matter and failure to show how it disproportionately affects those in developing countries. Film critics panned it as bleak, nihilistic and too accurate to be entertaining. (Spoiler alert: wealthy people escape to another planet and everyone else dies).

Whatever your opinion, the movie got a lot of people talking who were barely thinking about the climate crisis before, including a number of mainstream media outlets. Don’t Look Up is currently Netflix’s second-most watched original film of all time and its official trailer has been viewed more than 15 million times on YouTube. This Guardian op-ed penned by climate scientist Peter Kalmus has been shared thousands of times, including by director Adam McKay, star Leonardo DiCaprio, and many influential climate scientists and journalists.

I’m a climate scientist. Don’t Look Up captures the madness I see every day

Resolution idea for 2022: Give more Fs

We love to see communicators taking risks and undertaking bold campaigns in the name of social impact. Toronto-based Public Inc., no stranger to using f-bombs to draw attention to a cause, collaborated with First Peoples Group to draw attention to the inequities faced by 70 Indigenous communities across Canada that are still under boil-water advisories. Prime Minister Justin Trudeau promised to end boil-water advisories within five years when first elected in 2015 and has not attached a new deadline to the task. The video series features a group of Canadians, including Olympic figure skater Kurt Browning, decrying government inaction on the file and attempting to debunk the narrative that the issue is too complex to solve swiftly. The campaign is driving traffic to a petition that urges the federal government to act immediately. It has amassed over 10,000 signatures to date.

Sign the petition at efffingwater.ca calling on Canada’s federal government to fulfil its promise to First Nations people to end boil-water advisories.

Endorse the call (as an individual or an organization) for national governments to negotiate and ratify a Fossil Fuel Non-Proliferation Treaty to stop expansion, phase out fossil fuels and ensure a global just transition for all.