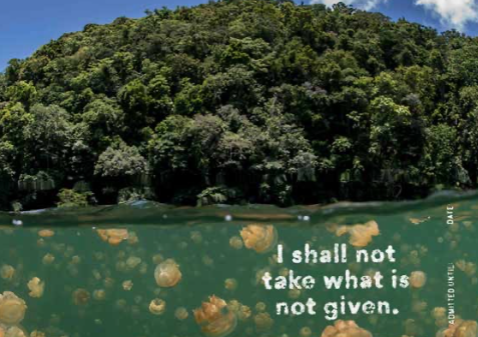 24 Sep Campaign of the Week | The Palau Pledge

Posted at 22:34h in Campaign of the Week by Jenna

A collaboration unlike any other, bringing government officials, tourists, and citizens of Palau together for a greater purpose, protecting the land for future generations.

Tourism is one of the largest and fastest-growing industries in the world, with over one billion tourist arrivals already registered somewhere on earth this year, and with 1.8 billion tourist arrivals projected by 2030. While tourism is a great economic booster, it can be costly – with the depletion of local resources, endangerment of native species and waste management being three of the most notable negative issues.

Unsustainable tourism practices were quickly depleting the resources of the Palau archipelago, found in the Pacific Ocean, which is made up of 340 coral and volcanic islands all packed with breathtaking beauty.

Finding themselves in the midst of ecological destruction, the nation of Palu worked with creative agency Host Havas and several other entities and agencies (full list below) to work out a way for the islands to protect themselves from the impacts of tourism by encouraging a Eco-tourism, a responsible way of traveling that keeps the environment and the well-being of local people front of mind.

The team struck genius. By modifying the resource-heavy task of policing tourists coming into Palau, responsibility was shifted from Palau officials to the tourists by letting them police themselves. In early December 2017, the world’s first immigration policy of its kind was introduced – the Palau Pledge –  a promise that all visitors entering Palau must sign. Stamped in their passports, the pledge asks tourists to promise to act in an environmentally responsible way on the island during their stay.

Looking to make the message as inspiring and emotionally evoking as possible, the Palau Pledge was written, in part, by the children of Palau. An accompanying video titled ‘The Giant’ was released depicting the children’s perspective and explaining to the tourism industry why preserving their home is important to them. The pledge is a personal promise to the children of Palau, from all visitors, to act mindfully and to preserve their homeland.

themselves, creating a movement that reminds everyone about the responsibility this

generation has to the next to protect and preserve the planet.”

The Palau Pledge quickly peaked media attention and began generating important climate and sustainability conversations worldwide. The campaign garnered 1.7 billion impressions within the first month of its launch, appeared in National Geographic and was endorsed by Leonardo DiCaprio who visited Palau and shared support via his social media.

This campaign brought global attention to a bigger issue plaguing the world, the state in which coming generations will find their environment. By focusing on encouraging mindful action to inspire social change, The Palau Pledge brought many organizations together with a common goal. 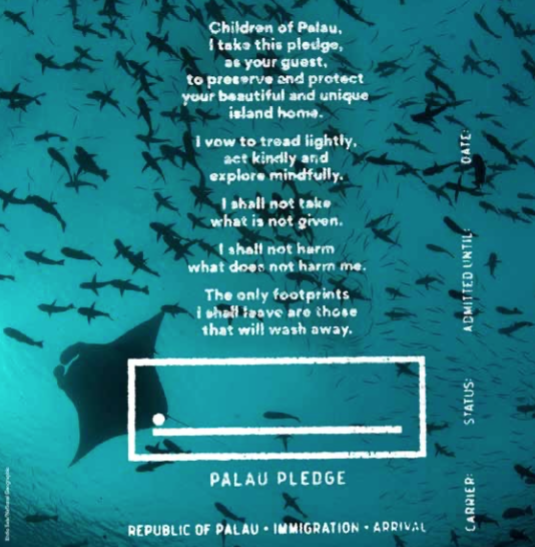