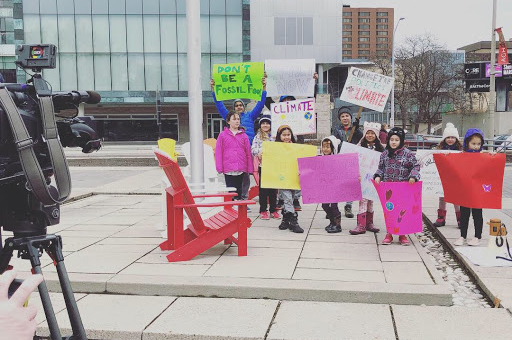 When I first moved to Hamilton, Ontario from Vancouver a few months ago, one of the first things I did in an effort to try to build community around myself was seek out an environmental organization to join. I came across a few people trying to get a local chapter of Extinction Rebellion off the ground, and the organization’s message of protesting government inaction on climate change resonated with me. When we held our first public meeting in December, we weren’t sure what kind of reception we’d get in our industrial city. We were floored when about 60 people attended.

A few months later, our group had grown considerably, and it felt as though momentum ws building around climate change. The global #FridaysForFuture day of action was looming — we knew the most powerful appeals for climate action come from youth, whose very futures are at stake, but we didn’t have many people under 25 in our group. Fortunately, we got wind of a couple organizers of a local youth protest, so a handful of us went out to support.

A tiny group of mostly elementary-age kids and their parents collected just outside of Hamilton City Hall and posed for photos with their signs, which read things like “Don’t Be a Fossil Fool,” and “#Act Now.” Once the local TV station had gotten a few quotes from kids and their parents, we collectively wondered what to do next. Someone suggested the kids walk up to the mayor’s office and ask if they could have an audience with him.

The strike wasn’t well timed for Ontarians, since students were out for Spring Break. Coincidentally, Hamilton City Council takes that week off too, so Mayor Eisenberger wasn’t in  his office. His community relations adviser came to the reception area to speak with the kids — he applauded them for their initiative, but didn’t offer much in the way of an action plan. “Well, I don’t own a car and I walk to work!” he exclaimed. “Do you kids use your bikes to get around?”

The local environmental groups in attendance offered to help organize and try to boost the turnout for future strikes, reactions were mixed as to whether anything had been achieved. Maybe some youngsters got their first taste of activism and ideas for the future. One attendee tweeted that she hoped we’d learned something by what didn’t happen that day — reminding us that environmental groups are rarely the first to go to bat for a livable environment. Racialized, Indigenous and low-income communities are disproportionately affected by pollution, especially in an industrial town like Hamilton, because industry and waste treatment plants tend to be built in their neighbourhoods. This makes platitudes like “go green” seem pretty shallow.

We didn’t get a Toronto or Vancouver or Montreal-sized turnout, but it was a start.

Author’s note: The Monday following the demonstration, Hamilton City Council voted to declare a climate emergency and establish a climate change task force to reduce emissions to net-zero by 2050.